Rebecca Campbell is a freelance singer, musician, arranger, and sometime songwriter. She plays Stella guitar, percussion, harmonica, and melodica. But mostly she sings, moving deftly from up front to backup. She is an interpreter and a collaborator. And a joyful, intentional, visceral, political, poetical singer, with a deep groove and a keen harmonic ear.

She is also an advocate for and producer of live music events.

Bred in the Maritimes and Ottawa, and schooled in Montreal, Rebecca has called Toronto home for twenty-five years. She's performed alongside countless artists and ensembles for over three decades, on stages large and tiny across Canada, the US, and the world. Her voice has graced the big and small screen, her choral arrangements have been sung by choirs across the globe, and she has sung on scores of recordings.

She is Vice President of The TRANZAC Board of Directors, and a member of the Canadian Independent Venue Coalition (CIVC), Love You Live Toronto Venues Association, and the Canadian Live Music Association (CLMA). She produces and stage manages live music events, notably, under the Rough Idea moniker, alongside the late great Ron Gaskin, and the Main Stage at Mariposa Folk Festival. She also hosts and techs rehearsals at Ratspace Rehearsal and Recording, makes graphic art, and fights the good fight. 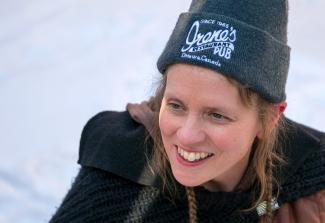